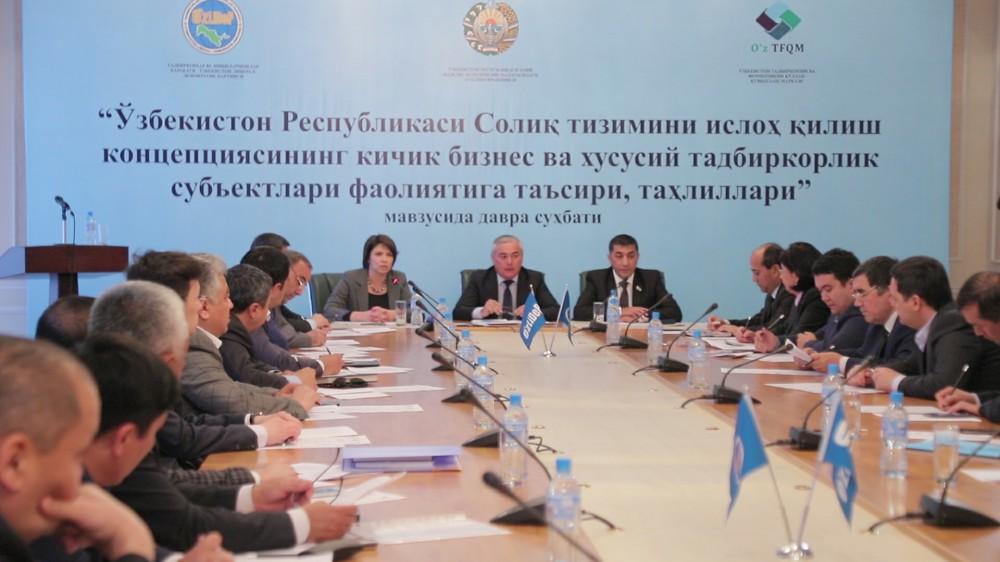 On April 10, 2018, the Executive Committee of the Political Council of UzLiDeP, the faction of the party in parliament jointly with the National Project Management Agency under the President of the Republic of Uzbekistan organized a "round table" to discuss the draft Concept of reforming the tax system and develop UzLiDeP`s proposals to improve tax policy.

During the discussion, it was noted that conditions for economic recovery are the formation of a favorable investment climate and business environment, an increase in the number of enterprises manufacturing competitive products. It was emphasized that reduction of tax burden, full support and assistance for entrepreneurs are important in these processes.

It was emphasized that fiscal policy should serve the development of a competitive and sustainable economy, especially, development of a family business and entrepreneurship, which are important factors in ensuring employment, creating new jobs, improving living standards of the population.

The participants of the event noted that UzLiDeP supports the course of reducing the tax burden on the economy and business entities, unifying and combining taxes, which have a similar tax base, and cancelling inefficient tax benefits.

The participants of the event stressed that the priority of tax policy should be the prevention of tax offenses. This can be achieved by increasing the legal culture of taxpayer, introducing modern methods of tax monitoring and control, providing full support to taxpayers in fulfilling their tax obligations.

In this regard, the participant believes that the most important proposals in the concept are the introduction of a risk-oriented approach, innovative methods of tax control, targeted provision of tax incentives and monitoring the effectiveness of their application, as well as the consolidation rules on the mandatory return to the budget of the amounts of inefficiently used benefits. Attention is focused on the introduction of such an effective mechanism, such as pre-judicial settlement of tax disputes between taxpayers and tax authorities, strengthening the role of civil institutions in this field, etc.

According to participants, the most important factor in creating a favorable business environment is precisely the stability of the legislation in the field of entrepreneurship, primarily the tax. In this context, the provisions of the сonception on: the maximum simplification of tax legislation, the direct operation of the norms of the tax code, the abrogation of all by-laws are of particular importance.

Predictability of tax policy in the field of entrepreneurship is an important factor. The party paid special attention to discussion of proposals within the framework of the concept, developed by its regional councils. These proposals are related to the issues of increasing the stimulating role of tax policy, supporting and improving the financial condition of small and private entrepreneurship, the family business, the practical implementation of measures planned in the Concept and aimed at creating a healthy competitive environment, realizing the principle of fairness of taxation, protection of rights and legal interests of business entities and investors.

In general, according to the participants of the event, the adoption and implementation of this concept will serve to accelerate the development of small business and private entrepreneurship, formation of a favorable environment for their activities.