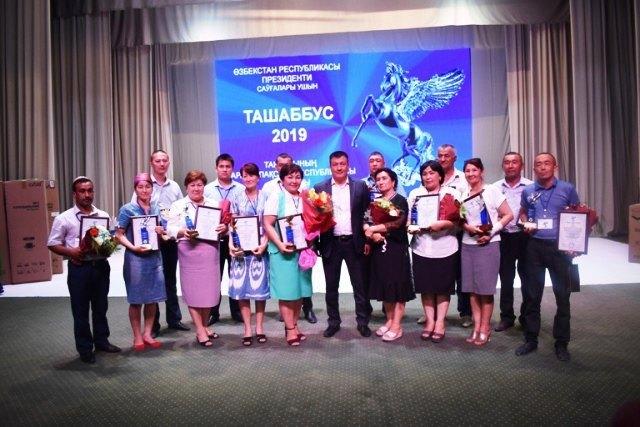 Nukus hosted Karakalpak stage of “Tashabbus 2019” competition for the prize of the President, held among businessmen, farmers and artisans.

It was attended by businessmen, farmers, artisans, including young entrepreneurs who make a worthy contribution to socio-economic development of territories.

According to the decision of the jury, the activist of UzLiDeP, head of the training center “Nukus Ziyoda-Nur” Z. Utenazarova was recognized the winner in the nomination “The Best Entrepreneur in the Sphere of Services”, she was awarded a voucher to the republican stage of the competition.

“In 2018, a training center was organized with cutting and sewing courses, hairdressing, and cooking”, Z. Utenazarova said. “Then, using the opportunities created by entrepreneurs, they opened courses of massage, computer literacy, accounting, and embroidery of Karakalpak patterns. Our future plans are the opening of a barbershop, furniture, shoe, mobile phone repair shops, English and Russian language courses. The trust placed in me gives me strength and energy”.

Another activist of the party, a private entrepreneur R. Matirzayeva from Shumanay won the first place in the nomination “The Best Craftsman”.

“We have been engaged in craftsmanship for 22 years, we produce clothes in the national style, carpets for yurts. My mom taught me the craft. I continue the traditions of “master – apprentice” school, taught 16 people. Such contests serve as an incentive for work and search”, said R. Matirzayeva.