STATEMENT OF MFA OF THE REPUBLIC OF UZBEKISTAN IN CONNECTION WITH THE ADOPTION OF THE UN GENERAL ASSEMBLY RESOLUTION «STRENGTHENING REGIONAL AND INTERNATIONAL COOPERATION TO ENSURE PEACE, STABILITY AND SUSTAINABLE DEVELOPMENT IN THE CENTRAL ASIAN REGION» 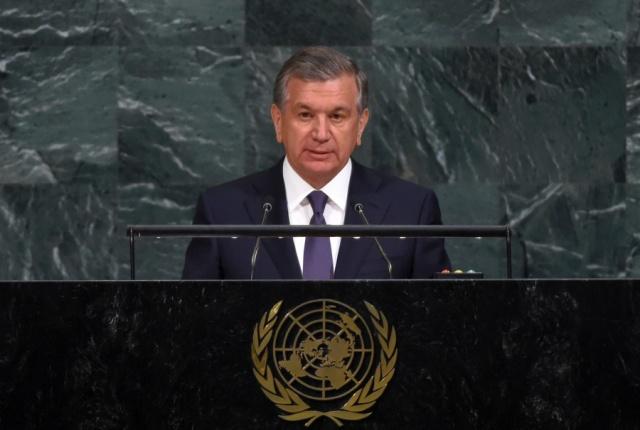 On June 22 this year, the UN General Assembly at the plenary session adopted the resolution “Strengthening regional and international cooperation to ensure peace, stability and sustainable development in the Central Asian Region”. The document, the draft of which was developed by Uzbekistan jointly with the neighboring states of Central Asia, was unanimously supported by all the UN member states.

The adoption of the resolution became a practical implementation of the initiative of the President of the Republic of Uzbekistan Shavkat Mirziyoyev, forwarded at the 72nd session of the UN General Assembly in September 2017, in New York. In his speech, the Head of Uzbekistan announced about the conduction of a high-level International Conference on Central Asia in Samarkand in November 2017 under the auspices of the UN and proposed the development of a special resolution of the General Assembly on its results in support of the efforts of the Central Asian states to ensure security and strengthen regional cooperation.

55 countries of Europe, North and South America, Asia and Africa became the co-authors of the resolution. Among them are Australia, Austria, Afghanistan, Belarus, Germany, Italy, India, Indonesia, Canada, Nigeria, Norway, the United Arab Emirates, the Republic of Korea, Singapore, Turkey, Switzerland, Ecuador and others. All the leading partner states of Central Asian countries, including Russia, China, the United States and the EU actively and constructively participated in consultations on drafting the document.

The important role of Central Asian countries in ensuring peace, stability and sustainable development in the region, as well as in promoting regional and international cooperation is recognized in the resolution. The major regional and international initiatives of the Central Asian states in the areas of security and development are particularly noted.

In the document, the General Assembly expresses its support for the efforts and initiatives undertaken by the countries of the region, aimed at strengthening stability and economic cooperation in Central Asia. Noting with satisfaction the regional support for the initiative of Uzbekistan to convene the consultative meetings of the Heads of Central Asian states on a regular basis, the resolution calls on them to effectively use the platform of such consultations for jointly addressing the current problems of the region. Holding the first summit of the Heads of Central Asian states on March 15, 2018 in Astana is welcomed in the document.

The importance of developing bilateral and regional cooperation in strengthening security, rational and integrated use of water and energy resources in Central Asia, mitigating the environmental and socio-economic consequences of the drying up of the Aral Sea, creating a modern transport and transit system in the region, deepening relations in the spheres of education, science, technologies, innovations, tourism, culture, art and sports is noted in the resolution.

Particular attention is paid to the joint efforts of the Central Asian states aimed at promoting the peace process and socio-economic development in Afghanistan. The importance of the Tashkent Conference on Afghanistan “Peace process, security cooperation and regional connectivity”, held in March this year, to achieve peace and reconciliation in this country is emphasized.

The resolution calls on the international community, in particular the specialized agencies, funds and programs of the UN system, to support the priority areas of regional cooperation, integration and sustainable development in Central Asia, as determined by the countries of the region themselves.

The unanimous endorsement and adoption of this resolution in the UN testifies to the wide international recognition of a completely new atmosphere of trust and good-neighborliness in Central Asia, formed due to open, balanced and constructive foreign policy of the Republic of Uzbekistan under the leadership of President Shavkat Mirziyoyev. Ensuring peace, stability and sustainable development of Central Asia, people of which are bound by millennial ties of brotherhood and good-neighborliness, common history, religion, culture and traditions, is the main priority of foreign policy course of Uzbekistan.

Undoubtedly, the adopted UN General Assembly resolution is an important stage in becoming of Central Asia a single consolidated region, the states of which are able to jointly solve common problems, ensure prosperity of the region and well-being of its multi-million population.