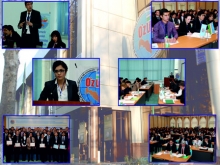 The objectives of the contest:

To participate in the implementation of the priority tasks outlined in the Concept of further deepening the democratic reforms and the formation of civil society in the country, as well as in UzLiDeP Program.

To increase the social activity of youth and in the discussion of its medium-and long-term policy goals and objectives to deepen and expand legal framework of democratic reforms, to the creation of opportunities for their professional, creative and career growth.

To train a highly educated and intellectually advanced generation, to make a major contribution to ensuring the successful outcome of the urgent tasks and priorities to support of the socially active and talented young scientists, facilitating the attainment of their rightful place in society.

To develop of each area of ​​socio-economic life of the country, as well as the involvement of young people to ensure the development of the country, the efficient use of its talents, scientific potential and initiatives.

To form of an atmosphere of cooperation and friendship between the young scientists and researchers and to create of conditions for exchanging experience as well as for mutual assistance in the conduct of scientific activities.

The object of the contest:  UzLiDeP electorate - young scientists and senior scientific researchers.

The tasks of contest:

To ensure of wide involvement and encouragement of young people to take part in the processes of research, application of scientific innovations, inventions, creating innovative technologies.

To identify talented youth, conducting independent research on current topics, who have the ability to create scientific innovations, but also provide a useful social life science innovations, but not noticed by scientific societies, to render practical assistance for the development of their proposals and recommendations.

The conduct of scientific and practical research, the develop projects on issues related to the socio-economic life of the youth of the country, its education and training, study youth problems, weaknesses, successes as well as the conducting state youth policy and other the issues in this direction.

In the competition may take part young scientists and researchers with their written scientific works on the following topical areas:

I. The democratization of State and public administration and development civil society.

II. Reform of the judicial system.

III. The deepening of market reforms and liberalization of the economy.

Dates of the contest:

Competition will be held in Tashkent as a Republican scientific conference and contest.

The expected results of the project:

Providing participation as young scientists, specialists, experts in the legislative process directed to the implementation reforms in the legal and economic spheres, which conduct Party and its Faction in the Legislative Chamber of the Oliy Majlis.

Inclusion in the party`s personnel reserve the number of young scientists, researchers and activists who have organizational and business skills.