Meeting of the Political Council of UzLiDeP was held in Tashkent 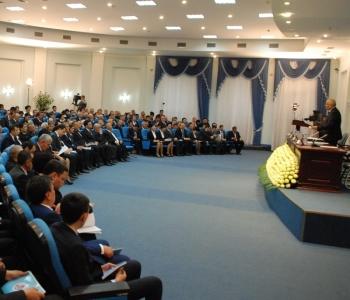 On December 12, the Political Council of UzLiDeP held its regular meeting.

At the meeting, participants summed up the results of elections of the President of the Republic Uzbekistan which took place on December 4, 2016. Members of the Political Council emphasized that the elections were held in full compliance with the requirements of the national legislation of our country and internationally recognized standards, based on openness, transparency and alternative. As the results of the elections, 88.61 percent of voters have voted for candidate from UzLiDeP Shavkat Miromonovich Mirziyoyev.

It was noted that the country’s citizens have taken active part in the vote, showing a high level of political and civic stance, as well as a sense of belonging to the fate of the Motherland.

It was also underlined that the UzLiDeP has taken active part in this political event, where the pre-election program of its candidate has received broad and comprehensive support by our people, this places considerable responsibility on the party’s structural divisions and on its every member.

During the event, in accordance with Article 98 of the Constitution, members of the Political Council comprehensively considered the nomination for the post of Prime Minister of  the Republic of  Uzbekistan. It is well known, that in line with the Constitution, the candidacy of  Prime Minister is proposed by political party, which won the most seats at the Legislative Chamber of Oliy Majlis.

During the discussions it was emphasized that the head of government should have great potential and organizational skills to implement the objectives outlined in the pre-election program.

It was noted that Aripov Abdulla Nigmatovich is selfless, proactive and demanding person, who works for interests of people and capable of conducting reforms in the country.

The Political Council of UzLiDeP also considered other relevant issues, concluding the session.