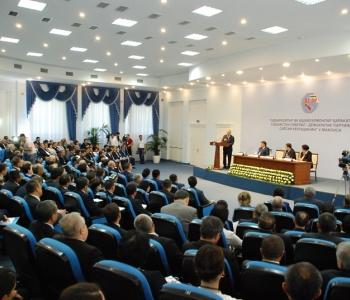 On September 16, the Political Council of Movement of Entrepreneurs and Businessmen – Liberal Democratic Party of Uzbekistan (UzLiDeP) held its regular meeting.

Before the beginning of the event, the participants paid tribute to the memory of the First President of the Republic of Uzbekistan Islam Karimov.

The participants also discussed the issue of the candidate to be put forward from the Movement of Entrepreneurs and Businessmen - Liberal Democratic Party.

In particular, on the basis of the will of the voters and the electorate, they unanimously supported the candidacy of the member of the Political Council of UzLiDeP Shavkat Mirziyoyev for the office of President of the Republic of Uzbekistan, which is to be considered at the next VIII Congress of the party.

It was stressed that Sh. M. Mirziyoev has many years of experience in management positions in bodies of state power and administration, is highly respected among the population, has showed high leadership potential and organizational skills in implementing large-scale reforms in the political, social and economic spheres, carried out under the leadership of the First President of the Republic of Uzbekistan Islam Karimov.

The party believes that Sh. Mirziyoev is able to provide the continuity and to bring the country's reforms for further democratization and liberalization of all aspects of society to a new stage, to fully take responsibility for the successful implementation of measures aimed at strengthening the independence, prosperity of the Motherland, ensuring stable economic growth and people's welfare.

Considering that in accordance with article 24(2) of the Law "On elections of President of the Republic of Uzbekistan”, the nomination of candidates for President of the Republic of Uzbekistan is carried out by the highest organs of political parties, the meeting participants adopted the decision on convening the next party Congress on 14 October, 2016.

The political Council of UzLiDeP also adopted a decision on the timely submission of the documents to the Central Election Commission of the Republic of Uzbekistan, on the participation of the party in the upcoming elections in the terms established by the electoral legislation, conducting regional, district conferences of the local councils of the party in preparation for this important event, as well as taking other necessary measures.