UzLiDeP defines further tasks for implementation of the State Program 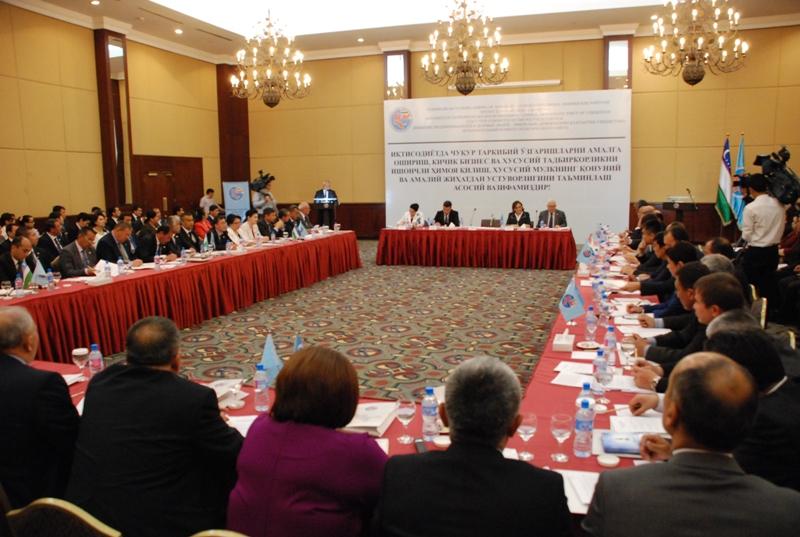 On 16 April 2016, the Executive Committee of Political Council of UzLiDeP held a session to discuss the implementation of the State program «Year of a healthy mother and child» and the improvement of further activities of the party organizations in the execution tasks of the Comprehensive target program of practical actions of UzLiDeP for 2016.

It was noted, that in order to implement the State program UzLiDeP and its deputies carry out purposeful work to improve the legislation relating to upbringing healthy, harmoniously developed generation.

Gulshan Hudoyarova, member of UzLiDeP faction in the Legislative Chamber of Oliy Majlis of the Republic of Uzbekistan:

« UzLiDeP faction in the framework of the State program "Year of healthy mother and child" pays close attention to the further improvement of legislation related to protection of the family, motherhood and childhood. In particular, deputies of UzLiDeP work to make changes and additions to the law "On state youth policy" in the new edition, the Criminal Code for protecting women who have children under three years, and the law "On quality and food safety" for restricting the importation and consumption of food products containing genetically modified organisms (GMOs) especially in baby food. In the center of deputies’ attention will also make changes and additions to the law «On guardianship and custody», aimed at ensuring children's rights, health, housing and education in a healthy family».

«UzLiDeP works systematically with the female electorate and intensifies its work on the implementation of the State program "Year of healthy mother and child". This year scheduled even more effective organization, improving the quality of existing and new party projects, thereby embodying a noble idea "Healthy mother and child - happy family, happy family - a strong society”.

«UzLiDeP continues to implement the project "Forum - dialogue of entrepreneurs and farmers", which promotes the creation of a favorable business climate for the development of small business, entrepreneurship and farming. Effective work of the party in this direction allows to expand the electoral and social base of the party.

The project also planned controlled and analytical measures of UzLiDeP deputy groups to monitor the business development at places and based on the results information of heads and local executive authorities who are responsible for the development of relevant sectors of the economy will be heard».

It was noted that the implementation of Comprehensive target program of practical actions of UzLiDeP for 2016 would allow raising topical issues affecting the interests of the electorate by deputies in the parliament and local representative bodies.

Zakir Umarov, member of UzLiDeP faction in the Legislative Chamber of Oliy Majlis of the Republic of Uzbekistan:

«The most important tasks of the Comprehensive target program are to further increase the efficiency of deputies`s work in solving important issues of socio-political, socio-economic development and the improvement of the legislation.

In particular, UzLiDeP implements the project "Public expertise of bills taken in the field of further liberalization of the economy", aimed at the study of law enforcement practice in the relevant field and the development of proposals for the revision of draft laws on the part of the deputies».

It was noted that all structures of the party should actively work on implementation of the tasks identified in pre-election program of UzLiDeP and strengthen promotion of the party works among population and voters.

At the meeting, participants summed up and critically analyzed the work of UzLiDeP faction and deputy groups in the local councils on the implementation the election platform of the party as well as other issues within the competence of the Political Council of UzLiDeP were discussed.