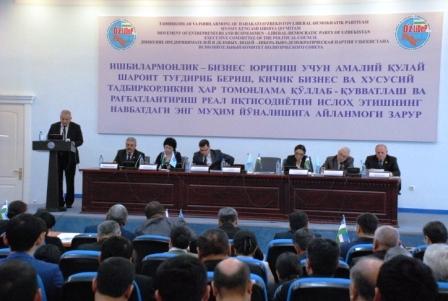 The recurrent meeting of the Political Council of the Movement of Entrepreneurs and Businessmen – The Liberal Democratic Party of Uzbekistan, was held on March 29, 2014 in the capital of the country. The meeting was focused on the results of the activities of the Party structures and the Unions of Deputies of UzLiDep within the reporting period, and on the issues concerning the further implementation of the policy goals and objectives of the Party.

The participants of the meeting emphasized that the operation of the party structures were based on the policy documents of UzLiDep, the main regulations of the Concept of further deepening the democratic reforms and the formation of civil society in the country and on the Statement of the President of the Republic of Uzbekistan on “Securing Uzbekistan’s prosperity through intensification of democratic reforms and formation of civil society” presented at the official meeting occasioned to the 21st anniversary of the Constitution of the Republic of Uzbekistan.

It was also noted that the ideas of the Head of State had reflected in the recently passed Law by the Legislative Chamber of the Oliy Majlis “On the Amendments and Annexes to the particular Articles of the Constitution of the Republic of Uzbekistan (the Articles 32, 78, 93, 98, 103, and 117)” submitted by the President of the Republic of Uzbekistan for the consideration of the Parliament.

The Amendments to the Constitution greatly influence on the further progress of parliamentarianism, provide new opportunities to the political parties for the effective implementation of their policy objectives, strengthening the multi- party system and competition between parties – one of the essential properties of the democratic society. They also significantly increase responsibilities of the political parties and the Unions of Deputies for successful execution of the wide-range democratic reforms and also their responsibilities in front of the current and next generations for founding democratic legal government and powerful civil society, and for formation of the great future of Uzbekistan. Consequently, there are great number of objectives to be completed by the Party structures and Unions of Deputies.

The UzLiDeP faction has worked out positions on more than 40 laws in draft on the basis of the policy goals and interests of the electorate and presented to the Legislative Chamber for consideration. The deputies have initiated 8 laws vital in further progress of democratic reforms, development of the movement of farmers, the small scale business, and the protection of private properties. The Unions of Deputies of the Party have conducted 681 hearings of the Executive Body Representatives, 293 of which have been devoted to the issues concerning the formation of advantageous business environment, and improvement of entrepreneurship. With the assistance of the Party more than 3000 women and youth were provided with favorable loans of commercial banks for the establishment and implementation of their business projects with the total sum of 24 billion UZS. More than 3500 farmers were rendered juridical aid in cooperation with the Council of Farmers to reimburse 12.5 billion UZS from various organizations for completed contracts.