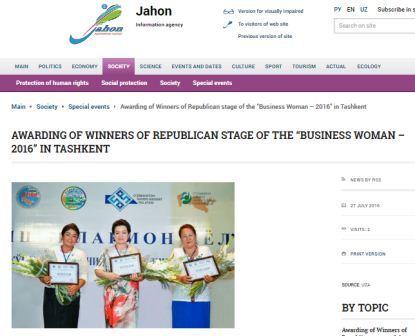 Tashkent hosted the ceremony of awarding of the winners of the Republican stage of the “Business Woman – 2016” competition.

The competition, held under the motto “My life, my destiny - my native, unique Uzbekistan!” by the Movement of Entrepreneurs and Businessmen - The Liberal Democratic Party of Uzbekistan in cooperation with a number of organizations dedicated to the 25th anniversary of Independence of our country, serves to expand the number and support women entrepreneurs.

Chairman of the Movement of Entrepreneurs and Businessmen - The Liberal Democratic Party of Uzbekistan S.Turdiev and others noted that under the leadership of the President of our country Islam Karimov special attention is given to women and their role in society is increased.

Currently, more than 120 thousand small businesses, more than 4 thousand 550 farmers of our country are head by women.

At the district, city and regional stages of for the first time conducted competition almost 10 thousand women entrepreneurs and farmers presented their projects. Projects of women entrepreneurs of the Republic of Karakalpakstan, regions and Tashkent city were considered in the nominations “Portrait of a modern woman-entrepreneur,” “Humane Woman-entrepreneur of the Year,” “Woman-farmer, developing rural infrastructure,” “Woman-Initiator”, 56 participants became winners. Loans amounting to more than 897.1 billion soums allocated by commercial banks in the current year to production facilities headed by women, illustrates the special attention paid to assuming women a worthy place in life of society.

The event, which has become a kind of celebration of business women, was organized an exhibition of products of women-entrepreneurs.

The winners and prize-winners were awarded with diplomas and valuable gifts.

Women’s wing Party and Mass Media
← Back to publications list