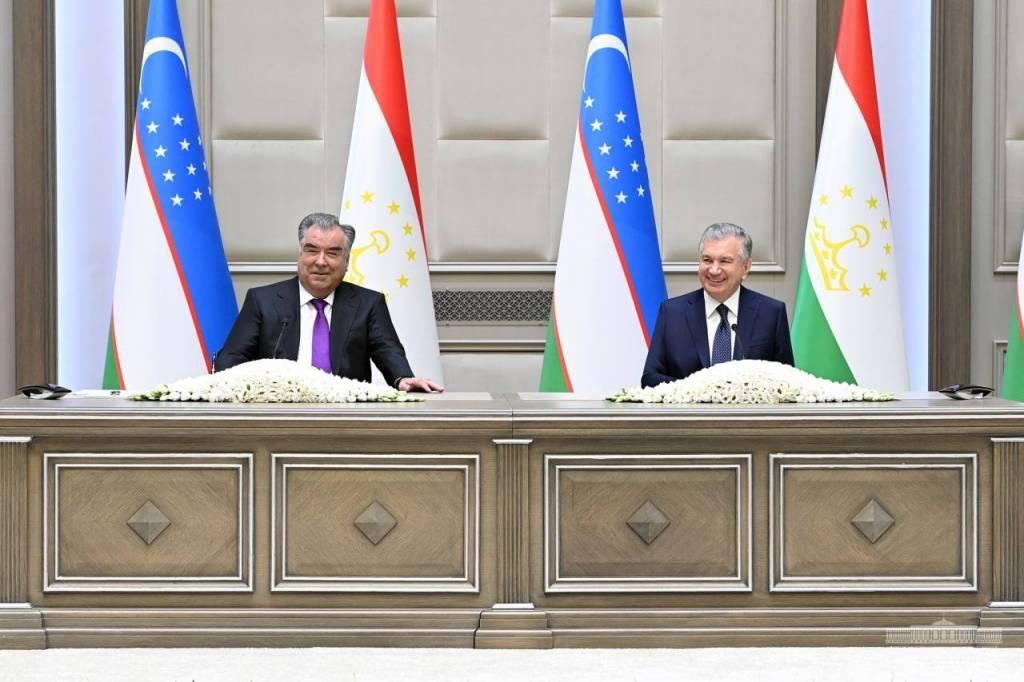 Following the talks between the leaders of Uzbekistan and Tajikistan, a briefing was held for representatives of local and foreign media.

Sincerely welcoming President Emomali Rahmon and members of Tajikistan delegation to the hospitable Uzbek land, President Shavkat Mirziyoyev noted that Tajikistan is a close neighbor, a true friend and a reliable strategic partner that has been tested for centuries.

“People in Uzbekistan sincerely value the friendship and good neighborliness with the fraternal Tajikistan people, which are based on a common history, spiritual and cultural heritage and good traditions of ancestors. We have always stood shoulder to shoulder, supported each other, both on bright days and in times of trial”, the President of Uzbekistan said.

He emphasized that thanks to joint efforts in bilateral relations, it was possible to achieve truly breakthrough results, to raise them to the highest level.

“It is thanks to this that a truly fateful decision was made today. We have signed a historic Declaration on Strengthening Eternal Friendship and Alliance”, Shavkat Mirziyoyev said.

“The personal contribution of the President of Uzbekistan to the development of good-neighborly relations between Tajikistan and Uzbekistan is highly appreciated in Tajikistan. In October this year, Tajikistan and Uzbekistan celebrate the thirtieth anniversary of the establishment of diplomatic relations. It is significant that in the anniversary year for us we decided historical significance – to raise the level of our relations to an alliance”, Emomali Rahmon said.

It was noted with satisfaction that in recent years the trade turnover has grown almost 40 times, and since the beginning of this year by 35 percent.

On the eve of the visit, a meeting of the Intergovernmental Commission was held in Dushanbe, and a business forum was held in Tashkent. A solid package of documents and contracts worth more than $1 billion was signed, and an action plan-for industrial cooperation was approved.

From June 20 this year, a passenger train will be launched on the route from Tashkent to Dushanbe.

It was emphasized that there are unique opportunities for fruitful cooperation in energy and rational water use. Support was expressed for the initiative of the President of Tajikistan on the establishment of the International Fund for the Preservation of Glaciers and the announcement of 2025 as the International Year for the Preservation of Glaciers.

The main attention during the talks was paid to further expansion of inter-parliamentary dialogue and people’s diplomacy, the development of interregional ties, and strengthening cultural and humanitarian interaction.

“The bonding factor is our numerous national communities, which make a worthy contribution to the mutual enrichment and rapprochement of the fraternal peoples, as well as to the development of the two countries. We confirmed our readiness to continue to create all the necessary conditions for the successful operation of national cultural centers”, the President of Uzbekistan emphasized.

In addition, the Uzbek side intends to increase the number of educational grants allocated annually to Tajikistan citizens.

The regular holding of joint Film and Culture Days, and various festivals will continue.

As previously reported, shooting a joint film about the great friendship of two great poets and thinkers – Alisher Navoi and Abdurahman Jami will begin this year.

“I think that the film will be a long-awaited event as part of the wide celebration of the 30th anniversary of diplomatic relations between our countries”, Shavkat Mirziyoyev said.

During the talks, the leaders of Uzbekistan and Tajikistan also exchanged views on issues of regional security and stability, stated the special importance of the Consultative Meetings of the Heads of State of Central Asia, noted the need for continuing constructive dialogue and mutual support within the framework of international organizations and structures.