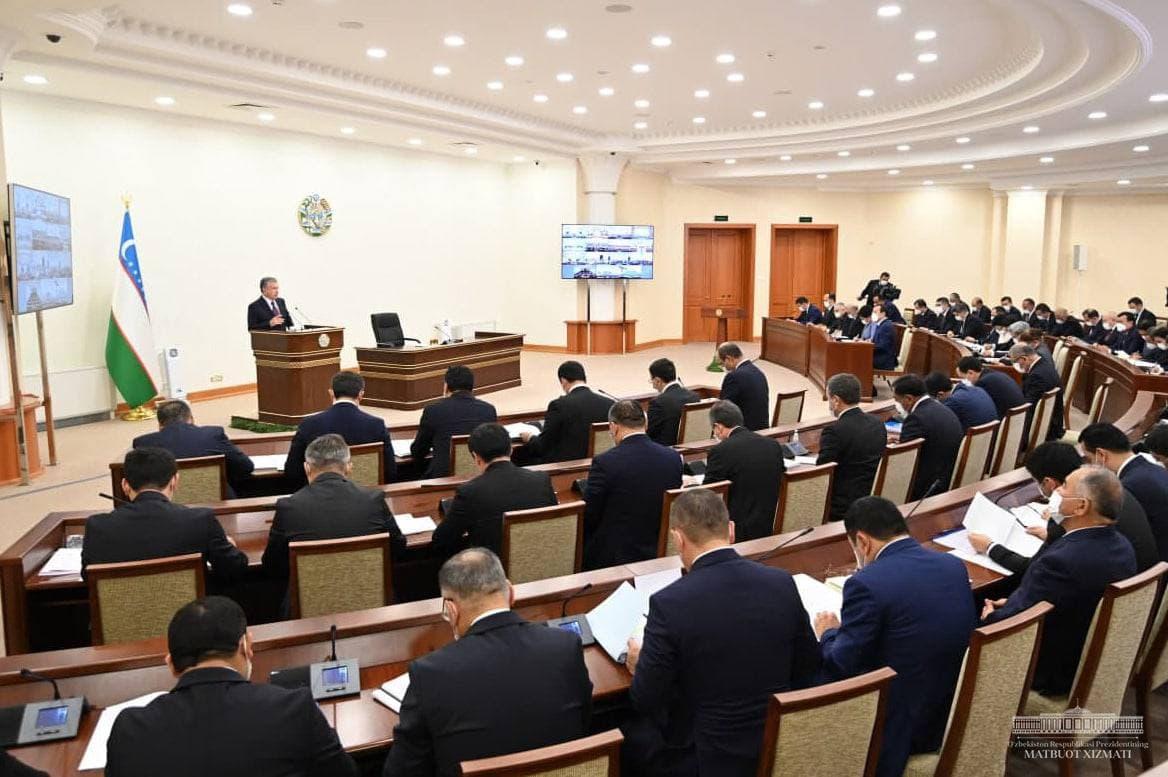 On August 3, President of the Republic of Uzbekistan Shavkat Mirziyoyev chaired a videoconference on the analysis of economic results for the first half of the year and measures to ensure sustainable economic growth in regions and industries by the end of the year.

It was noted that in the first half of the year, the country’s gross domestic product increased by 6.2 percent. This was mainly due to the growth of the industry by 8.5 percent, investments by 5.9 percent and services by 8 percent. The inflation rate was 10.9 percent.

During this period, industrial products worth 200 trillion UZS were produced. High growth rates were observed in the mining and metallurgical, textile and electric power industries in Kashkadarya, Syrdarya, Jizzakh, Namangan regions and the city of Tashkent.

This was achieved, first of all, due to the balanced activity of the economy and the improvement of the situation in foreign markets. Government resources are also an important factor in supporting economic growth.

The Head of the state noted that the expected results have not yet been achieved at places despite the allocation of the necessary financial resources for the development of regions and industries.

Industrial production increased by 41 percent in Syrdarya region, 33 percent in Khorezm, 24 percent in Namangan and Surkhandarya. However, in Fergana and Tashkent regions with great opportunities, the growth amounted to 1.2 and 4.6 percent, respectively.

In the first half of the year, 110 industrial enterprises in the regions produced goods by 2.2 trillion UZS less than last year.

The efficiency of investment projects was also considered. In particular, in the first half of the year, 5,246 projects were implemented within the framework of regional investment programs. However, their activities had almost no effect on the growth of the industry. Deputy hokims responsible for this do not work in close cooperation with enterprises.

During the reporting period, 53 thousand new business entities were created in the country, which is 14 percent more than in the previous year.

Measures to ensure economic growth until the end of 9 months and 2021, in general, were discussed at the meeting.

An important factor in achieving this goal is the production in the second half of the year of industrial products worth 86 trillion UZS at large enterprises and 142 trillion UZS in the regions.

For example, by the end of the year, the textile industry can manufacture products worth more than 15 trillion UZS and export products worth $1.7 billion. Or, in the electrical industry, exports can be increased to $348 million, and in the leather industry – to $251 million.

The need was noted for developing industries that are drivers in the regions, to enhance production at small and medium-sized enterprises.

Deputy Prime Ministers were instructed to study the launched projects on site and help them reach full production capacity.

Over the past five years, more than 30 decrees and resolutions of the President on comprehensive support and development of agriculture have been adopted.

Additional land areas have been put into circulation, subsidies have been allocated. The cluster system has been introduced in all sectors of agriculture. This year alone, more than 6 trillion UZS of loans were allocated to clusters.

However, the performance in this sphere does not meet expectations. There are many unused opportunities.

In particular, the volume of agricultural production in the Republic of Karakalpakstan, Bukhara, Kashkadarya, Samarkand, Khorezm and Tashkent regions remained at the level of last year. Plant production declined.

Yield indicators remain unchanged, and a decrease is observed for some types of products. An unsatisfactory level of work in animal husbandry and poultry farming was noted.

The Head of the state emphasized that the population’s demand for food is growing, and to satisfy it, it is necessary to increase production volumes.

Responsible persons were instructed to ensure an increase in the production and processing of agricultural products in the second quarter.

The main attention at the meeting was paid to the analysis of the service sector.

As is known, on May 11 this year, the President adopted a resolution “On measures to accelerate the development of the service sector”, which contributed to the implementation of projects to enhance the range and improve the quality of services in the regions.

“The state has created opportunities. Our people are active and hardworking. Now it is necessary to radically change the service sector. This is the cheapest way to create new jobs. The more services there are in rural areas, the higher the quality”, Shavkat Mirziyoyev said.

1 trillion 575 billion UZS were allocated to 7 commercial banks for the development of the sphere at the first stage. Thanks to this, 2.4 thousand projects have been launched in the regions.

As a result, the volume of services increased by more than 18 percent compared to the first half of 2020. High growth was recorded in Syrdarya, Andijan, Bukhara, Khorezm, Surkhandarya, Fergana regions and Tashkent.

The need was noted for continuing this work and the possibility of employing 415 thousand people by the end of the year. Promising measures in this direction are the allocation of empty buildings and land plots to entrepreneurs, and support for self-employment.

The Prime Minister and his deputies, heads of economic sectors and regional hokims presented reports on the issues discussed at the meeting.

The task was set to develop and ensure the implementation by the end of the year of specific plans for each industry and region.