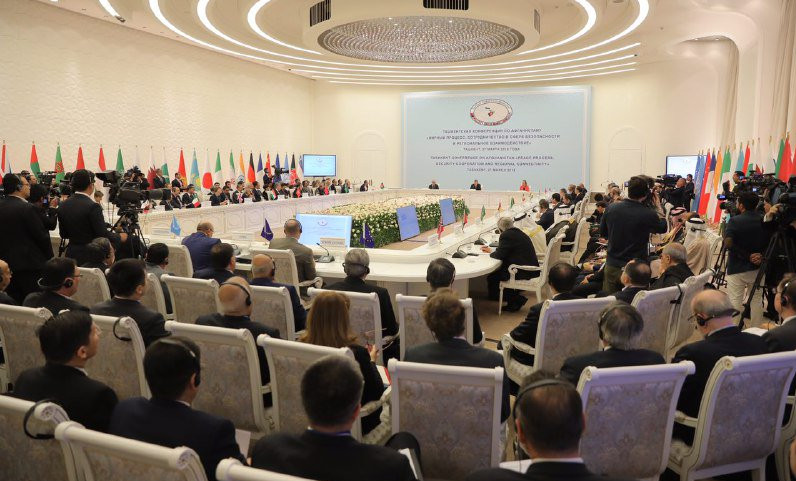 We consider the past high-level forum as one of the most important foreign policy initiatives of the Head of Uzbekistan aimed at turning Central Asia into a peaceful, economically developed and prosperous region. This is an important step on the part of Uzbekistan, which makes great efforts to make the region a zone of stability, sustainable development and good-neighborliness.

It may be said, without exaggeration, that the Tashkent International Conference on Afghanistan: «Peace process, security cooperation and regional connectivity» marked the beginning of a qualitatively new stage in ensuring security not only in Afghanistan, but also in the region and the world as a whole, the negotiations have risen to a completely new practical level in this direction.

This logical conclusion is based on a number of important ideas put forward in the framework of this conference, the implementation of which radically change the course within the Afghan crisis.

Focusing on this important issue, first of all, we would like to note the idea put forward by the President of Uzbekistan on the importance of ensuring, taking into account the extremely complex and contradictory nature of the conflict in Afghanistan, the involvement of various forces in it, and based on the certain resolutions of the UN Security Council, the promotion of a comprehensive peace process on three interrelated and interdependent levels. This systemic and comprehensive approach is the distinctive feature of the Tashkent Conference, the Tashkent format in solving the Afghan problem.

One of the key ideas, expressed in the report of the President of our country and reflected in the Tashkent Declaration, is the call for launching a direct dialogue, without preliminary conditions, among the central government and main forces of the armed opposition, primarily, the Taliban movement.

Noting the particular importance of this issue, we in UzLiDeP are confident that the choice in favor of the peace process remains the only solution to the ongoing confrontation for all intra-Afghan sides. We believe that the Afghan people have the right to determine their own destiny, and we support the view that the time has come to solve the problem, or it will be stretched indefinitely.

We are confident that the time has come to resolve the conflict, where there are no losers or winners, and the start of the intra-Afghan political process can no longer be postponed. Its delay will cost the lives of many more innocent people.

UzLiDeP completely agrees with the President's opinion that it is necessary to ensure a firm consensus, primarily with the support of Pakistan, India, Iran, Turkey, Saudi Arabia, United Arab Emirates, Qatar and the countries of Central Asia. At the global level – it is necessary to ensure a principle political support by leading world powers and donor organizations to the peace process and ensure financial assistance to Afghanistan’s socio-economic recovery.

In our opinion, that our common efforts to involve Afghanistan into the system of trade, economic, transport-communication and cultural-humanitarian relations with neighboring countries will significantly contribute to normalization of the situation and returning of this country to a peaceful life.

In this context, we would like to note that Uzbekistan is contributing a fair share to the socio-economic revival of Afghanistan: it supplies electricity, builds new transmission lines; builds a railway; realizes other strategic projects that make a real and practical contribution to reconstruction of Afghanistan’s economy, create new jobs and increase the transit potential of the country.

It should be emphasized that the task of achieving peace in Afghanistan is closely interlinked with efforts aimed at combating terrorism and extremism, which now have indeed turned into an unprecedented threat to global security. Today, all countries, to varying degrees, face threats of terrorism, religious extremism, transnational crime and drug trafficking.

At the same time, the party fully supports the idea of the President of the country that security is indivisible and it can be ensured only through joint efforts and we do not have a right to perceive some threats as «our own» and yet others as «not ours».

It should be emphasized that Uzbekistan has always adhered to a principle position in the fight against terrorism, ideology of extremism and radicalism, the influence of which is most often the young people. As our national and international experience shows, the most effective tool to counteract extremism is education, first of all, of youth, bringing to them the humanistic essence of Islam, the true values of Islamic culture. In this context, we note the special importance and value of the initiative of our Head of State to establish a special International Fund to Support Education in Afghanistan.

In general, we can say with confidence that the Tashkent Conference on Afghanistan has provided a unique opportunity for open and comprehensive discussions on a wide range of issues regarding the Afghan peace process, counter-terrorism and counter-narcotics efforts, regional economic cooperation and stimulated the elaboration of mutually agreed solutions.

If earlier many tried to solve the Afghan crisis in a divided manner by humanitarian assistance, financial injections, weapons and military equipment, then the past forum has opened up completely new possibilities for its solution. This conference demonstrated the great importance of Uzbekistan's efforts and practical initiatives for advancing the peace process and socio-economic development of Afghanistan, their involvement in regional political and economic processes, and the development of cooperation at the regional and global levels.

Considering that the important political events – the parliamentary and presidential elections are due in the next two years in Afghanistan, the implementation of the practical measures proposed in the adopted Tashkent Declaration will promote the consistent advancement of this long-suffering country along the path of stable democratic development.

In turn, UzLiDeP, as the leading political force of Uzbekistan, not only fully supports the decisions of the Tashkent conference, but will make every effort to implement them, to achieve practical results on a wide range of issues related to the Afghan peace process, the fight against terrorism and illicit drug trafficking, regional economic cooperation and others. At the same time, we are based on the position of the Head of our state that Afghanistan’s security is security of Uzbekistan, guarantee and pledge of stability, prosperity and sustainable development of the entire greater region of Central and South Asia.

of the Executive Committee

of the Political Council of UzLiDeP