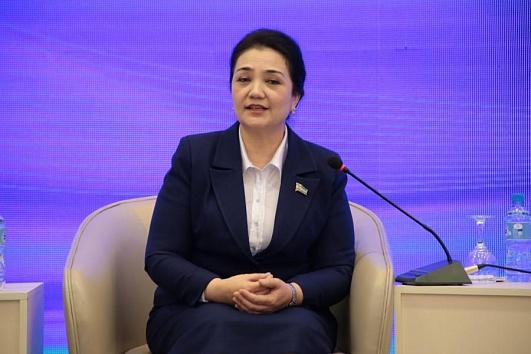 Large-scale activity is being carried out in Uzbekistan to protect the rights and interests of women, to ensure their active participation in socio-political life of the country, to ensure gender equality and reproductive health.

The Decree of the President “On measures for fundamentally improving activities in the field of supporting women and strengthening the institution of family” of February 2, 2018 became the basis for working in this direction at a qualitatively new level. The work of such a direction in the period when the increase in socio-economic and political-legal activity of women has become a requirement of the time, is recognized and highly appreciated not only by our people, but also by the world community, as well as by authoritative institutions such as the UN, the International Labour Organization, UNICEF, World Health Organization.

A new system of providing modern housing for socially needy women has been created in the country. Based on this system, 1,564 women received not only housing, but also jobs.

At the twentieth plenary meeting of the Senate of the Oliy Majlis, which was held recently, President Shavkat Mirziyoyev noted: “Showing respect for a woman is, above all, a display of respect for the family and the future of society”. Not without reason, it was noted that the level of culture of any society is determined by the attitude towards a woman.

At present, there are 17 women senators in the highest authority, the Senate of the Oliy Majlis, and 21 women in the Legislative Chamber. In local councils, women constitute more than 23 percent of people’s representatives. More than a thousand women lead the citizens’ assemblies of makhallas.

At the meeting, the President outlined a number of tasks such as increasing the number of women in parliament and local kengashes, supporting women living in socially difficult conditions, preventing crime among women, increasing the participation of non-governmental non-profit organizations in matters of women’s employment, and creating conditions for women to obtain modern professions. Ensuring the execution of these tasks will certainly help women to occupy a worthy place in society and to improve their social status.

The Head of the state proposed the creation of a new structure in the Senate of the Oliy Majlis of the Republic of Uzbekistan – a committee on the issues of women and gender equality. This structure will contribute to increasing the socio-political activity of women in the life of society, creating opportunities for them.

It should be emphasized that in the current globalization process, time itself requires the development of draft laws “On guarantees of equal rights and opportunities for men and women”, “On protection of women from oppression and violence”. In this process, we, the deputies, should take an active part and contribute to development of fair laws, each article of which will act and not create barriers to the application of the law.

Member of the faction of UzLiDeP

in the Legislative Chamber of the Oliy Majlis